Play Catch
If your pet had thumbs, what would it do?
Reply 198
My cat Selene would open every drawer and cupboard in our place and explore them all.

My mother thinks I should keep a journal. I've been lazy about posting lately, but I guess this blog is the closest thing. I find LJ a little more friendly and inviting for longer posts than Facebook.

Anyway, here are some random thoughts and happenings from the past week.

It is a bad idea to drink wine on an empty stomach (makes me grouchy).

Being con chair for Balticon really is about herding cats.

Designed a form I needed for Balticon - had no clue how to do it until I got some ideas from another organization's similar form. At least I did not have to reinvent the wheel.

No matter how well you do something, there is always someone who will say "nice job, but--" (nitpick, nitpick).

A 4GB smart-card is not large enough to record 50 minutes of video on my digital camera (although the 20 minutes I did record yielded surprisingly good video and audio). Thought I had an 8GB card in the camera. Oh well, lesson for future.

Why should the question of gay marriage (once approved) in MD be put to referendum? How can it be legal to allow a civil rights issue to be decided by referendum? And why would one group who had to fight for their civil rights not naturally be behind another group fighting a similar battle? I don't get it.

There has got to be a better way to clean up after a dog than picking up poo with your hand in a plastic bag. My neighbor's bag broke the other day while she was conversing with someone (and she still kept listening, just to be polite I guess). Yuck.

A company owes my husband $200 for writing a book chapter. The check was deposited within the allowable time stated on the check (180 days) and still bounced. I have contacted them twice for a replacement check, and it has been two months and they have done nothing. I am thinking of offering them a choice: a) I go to Philadelphia and pick it up in person, and you reimburse us travel costs (train) on top of the bad check; b) you mail the replacement check immediately plus the $29 bounced check fee. Take your pick. Kept calling today trying to get a live person, and every time I got voicemail and could not get back to the operator, had to hang up and call back. Poor customer service. Maybe I should just start invoicing them and see what happens.

Whatever happened to the old "phone etiquette" model that said a company should answer the phone (in person, not via voicemail) within app. 3 minutes, and keeping one on hold longer than that is poor customer service?  Spent at least 5 minutes wading through my car insurance company's voicemail before I could get a person. Also, if a company is not open for the day, their recording should say so up front.

Why is there no Famous Dave's in Baltimore City or Baltimore County? I wonder if I should mount a petition.

I bet we are going to have an early spring (including lots of pollen) this year. One day it is cold and raw, the next it is mild and pleasant. What gives? Global warming maybe?

Had weird dreams last night about finding people I know inside my apartment without knowing how they got in, and then couldn't stem the continuing influx.

Why does my husband always have computer problems between 8 and 9 a.m. when I am trying to sleep?

Had a chance to catch up over the holidays (and not being able to go to sleep right away at night).

Addams Family Values – Not too bad remake of the original series, but then it is hard to improve on perfection. Favorite line – Wednesday to Gomez: “You sent us to summer camp. They made us SING.” Cousin Itt’s offspring looks like a Yorkie, and as for Uncle Fester, you just can’t keep a good zombie down. Anjelica Huston rocks as Morticia.

Conan the Barbarian (2011) – The more testosterone you have, the more you will like this. The witch-daughter had potential. Movie would have been better if done with camp. The blood/guts/gore overshadows what plot there is. I still wish they would just take some of Robert E. Howard’s original tales and make a movie rather than reinvent the wheel.

Enchanted – Cute modernization (and some twists) on the theme of the Prince and Princess finding true love and MAYBE living happily ever after (in Manhattan?). Nice juxtaposition of animation and live-action.

Office Space – My husband won’t watch this movie because he says it reminds him too much of the typical workplace. I think it is funny as hell.

The Santa Clause – If you accidentally kill Santa Claus, you have to take his place. Tim Allen is cool.

The Santa Clause 2 – Santa Claus needs a Mrs. Claus. Tim Allen is still cool. We get to see Michael Dorn in a suit!

The Santa Clause 3: The Escape Clause – Jack Frost is no substitute for the big guy. Martin Short rocks, the Tooth Fairy becomes “The Molinator,” and Comet farts a lot. And Billy Mumy’s offspring is too cute for words.

Swingers (1996) – Looking for love in all the wrong places, until you stumble across it. Not bad, but not a chick flick.

Thor (2011) – Obviously setting up a sequel, and a precursor to “The Avengers.” Liked it better than Conan. Neat special effects, some humorous moments, and nice eye candy. Inky and Selene would like to wish everyone a happy holiday season!

Please join the Kinlocks for a post-Thanksgiving potluck party on Friday, Dec. 2, starting at 7 pm. Place: my building's community room. Please RSVP by Wednesday, Nov. 30 so we will know app. how many people to expect. Park in the lot behind our building (or on Roland Avenue). When you arrive, use the keypad at the front or back door to scroll to "kinlock" and press the call button and we will let you in. If you need directions, let me know. 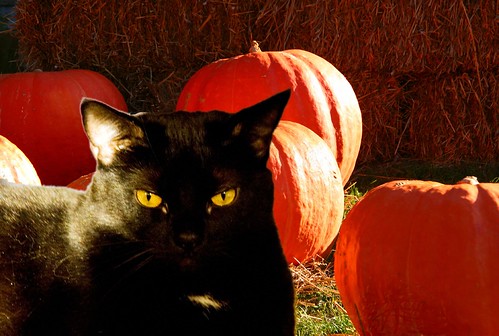 Inky would like to wish everyone a very scary--and happy--Halloween!

Just finished tweaking my TC Mabon ritual. Writing rhyme is not as easy as it used to be! When I first started writing poetry, rhyme was all I did. It was almost a piece of cake. Then I branched out into "free verse" because, according to my English professors, rhyming poetry was more than passe. Lately I haven't written poetry as often. I suppose it is good to get out of one's comfort zone sometimes.